Top 15 Most Beautiful Crested Birds. Birds’ world is filled with amazing things. Some birds fly over higher than Mount Everest, some can create continuous flight you can’t even imagine, while some mimic our languages with astonishing accuracy, and some even have hairstyles that are better than ours. This is the top 10 birds that have the most stunning the crests.

Hoopoe is a stunning and prominent bird found across North Africa and Eurasia. It’s famous for its stunning feather crest. The chestnut-colored feathers are long and have sharp black tips. The majority of the time the crest of hoopoes can be seen falling backwards from their heads. When they’re scared they will display their the crest in a beautiful round shape.

Body feathers on a hoope are just as beautiful as the crest. They sport a beautiful cinnamon-colored pattern. They also sport stripes in white and black. Another fascinating aspect of hoopoes is their lengthy black bill. It’s stunning and an essential tool. Hoopoes utilize this long bill to extract insects from the ground swiftly.

It’s a beautiful water bird which lives in shallow waters across Europe. Great crested grebe is the biggest bird in the grebe family throughout Europe. The large bird is beautiful with a long neck with a long beak, and a distinctive black crest that is adorned with orange tipspets. The gorgeous feather crest can be present in male and female Grebes.

Apart from the attractive head-plumes Great crested grebes also are known for their extravagant courtship displays. As the breeding season approaches in the summer months, two females and the males come up to one another with weeds on their bill. They then move their heads and shake their crest. It’s among the most gorgeous courtship displays seen within birds’ family.

Himalayan Monal, a stunningly vivid bird is native within the Himalayas. Males are more vibrant than females. Their stunning plumage is a mix of metallic blue green, red, and purple. Male birds also have striking metallic green head plumes.

Female Himalayan monal does not have the same striking hues as males. They sport a brownish-colored plumage. The head plumes can also be seen in females. They are small, and have a brown hue.

It’s a stunningly stunning, but not widely known species located in Nicobar Islands of Bay of Bengal. With its Iridescent green feathers Nicobar Pigeons are often regarded to be the most beautiful bird anywhere in the world. Additionally, Nicobar pigeons have long blue-green feathers that cover the upper neck.

The long feathers on the neck provide Nicobar hairs that resemble pigeons. This also gives the birds a distinctive appearance. As compared to males Nicobar Pigeons are smaller with brownish-colored underparts.

Secretary bird is a huge bird that measures 1.2 to 1.4 meters tall and can fly 3 meters. They are native to grasslands and savannas of Africa. Secretary birds aren’t just famous for their size , but also for their stunning plumage and their crest of feathers. The feathers on their heads are perhaps the most intriguing and distinctive characteristic of secretary birds.

The feathers on the back of their heads are long and feature the black color. When they are raised, these feathers look like the crown. Body feathers on the secretary bird are gray with the flight feathers being black.

In the forests that are found in Australia, New Guinea, and Indonesia, Sulphur crested cockatoo is among the most stunning parrot species around the globe. Based on the title, the bird comes with a gorgeous sulphur-yellow feather crest. Body feathers on this bird is entirely white. The big white bill, gray and the dark eyes of cockatoos with sulphur crested eyes are beautiful too. Female and male cockatoos are also similar. 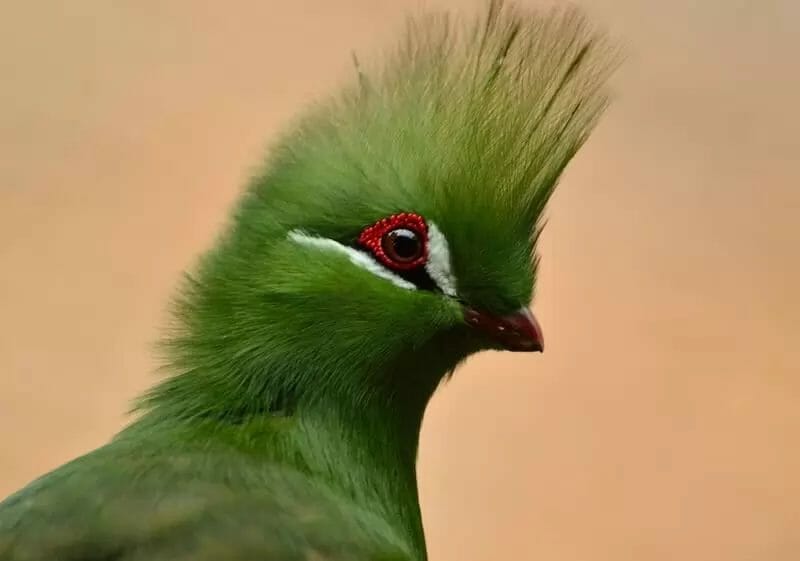 Guinea Turco is a medium-sized bird with a striking plumage. The gorgeous bird is found in the savannas as well as forested regions of Africa. From head to chest the plumage of turacos is green. The back and tail have a dark purple hue. However, the 2 inch long green crest is perhaps the most noticeable feature of the guinea Turacos. Turacos show the feathers’ crest at their full length whenever they feel triggered.

Indigenous from West as well as Central China, golden pheasants are among the most beautiful birds around the globe. The male pheasant is brighter in hue than female. The female pheasant is dull brown colors, while the male is a mix of various brilliant hues.

Despite the multi-colored plumage, the magnificent crest is the most notable aspect of a male pheasant. These long golden yellow-colored feathers of the crest reach to the top the neck. Top 15 Most Beautiful Crested Birds

Concerning the body feathers golden pheasants have red underparts with bright yellow wattle the upper backs are green, with golden rumps, and an extended brown tail. It is interesting to note that the tail of male golden pheasants makes the equivalent of two thirds of its length.

Grey-crowned crane is an enormous bird that is found in the grasslands and wetlands in Eastern as well as Southern Africa. It is one of the National Bird of Uganda. Like their name suggests, this bird has grey-colored plumage. They are it is also stunningly decorated with a crown.

The wings of the birds are made up of white and black. Perhaps the most appealing element, the crown, or crest is adorned with beautiful, golden-colored feathers. Also, they have a vibrant red-colored throat pouch.

The wings are made of white and black. Perhaps the most appealing aspect, the crown or crest is decorated with beautiful, golden-colored feathers. They also come with a beautiful red-colored throat pouch.

The pigeon’s length is 30 inches and as much as 3.5 kilograms, Victoria crowned pigeon is the biggest living pigeon species found around the globe. They are found in the forests of lowland that are found in New Guinea and Indonesia. The most distinctive feature of the pigeon is the stunning feather crest that resembles lace and white tip.

The gorgeous pigeon also sports blue-gray body feathers paired with maroon underparts, and stunning red eyes. Male and female pigeons appear almost identical. The only difference that is noticeable is the hefty male’s size. In the breeding season, male crown birds display a spectacular courtship show by bowing their beautiful heads and tail.

It is the Steller’s Jay is a bird that is found in the west United States throughout the northern Rockies as well as Mexico as well as being it is among the top famous species. Steller’s Jay are huge black-headed jays that have the appearance of a blue-shining body with a feathered crest at the top of its heads, which gives its appearance an exotic look. Steller’s Jays are often found in chaparral, scrub forests brushlands and high elevation conifer woodlands or coniferous forests, in which they construct their nests in bushes or trees.

They also dwell in open prairies with scattered trees, which offer nesting spots and shade from the scorching sun in the summer. Steller’s Jays eat mostly acorns and pine nuts, as well as fruit insects, small rodents that they spot on the ground or take from birds that store their food in the ground. Steller’s Jays live up to 10 years old in the wild, but they may live up to 30 years in captive.

Blue Jays are very common birds throughout North America. They can be seen anywhere from California up to Canada and are the only bird to be found all year round across all 50 states. Blue jays are known by its bright blue throat feathers and black crest. They are found in scrubby areas, woodlands suburbs, and farms.

The diet of Blue Jays is a mixture of Blue Jay consists of nuts and berries, insects chicks, eggs and of other species of birds. Blue Jays are common visitors to bird feeders, where they are able to eat sunflower seeds as well as peanuts, safflower seeds or mix seeds. Blue Jays can be seen flying through fields in search of foods during the migration period, which starts in the late part of March.

Keep an eye out for be on the lookout for Northern Cardinal. It’s much more common than you imagine and might be in your yard. This bird can be seen on the ground or in bushes, or trees while it hops between branches. It is also found in bushes and trees. Northern Cardinal is a large predominantly red-colored bird which is seen all over North America from Eastern Canada up to Southern Mexico.

In addition to their vivid hue, they are also recognizable because of their pointed crest that gives the appearance of a smug appearance. Males have a larger the crest as compared to female cardinals. They generally consume seeds, nuts , and berries as well as smaller insects like spiders and caterpillars, but they also eat a few fruits. Top 15 Most Beautiful Crested Birds

Within the Eastern United States, we have the adorable bird”the Tufted Titmouse. They’re small and you won’t consider them a threat as they fly through your backyard But don’t let their cute appearance make you believe otherwise! The Tufted Titmouse has a reputation for its ability to eat insects such as spiders, beetles, ants and crickets. They also consume seeds from acorns, grasses, or acorns which it breaks by using its beaks to grab the seeds inside.

They are renowned for their tiny beaks and their fluffy, tufted crowns which provide them with an “fuzzy” look. Their preferred habitat is the woodland edges, deciduous forests and hedgerows, parks, suburban gardens, and open woodlands with thick understory vegetation. They are frequently observed in residential areas and other habitats created by humans during the winter months, when food is difficult to come by.